Hey fellow airline directors! It feels as if it's been an eternity since I wrote a devlog for you. But finally we're back with some news. :)

Most of the focus of this month (development wise) went to the set up of your airline in the sandbox mode. In the video below you can see how far we've come so far.

Let's dive a bit deeper in to the various settings and features. 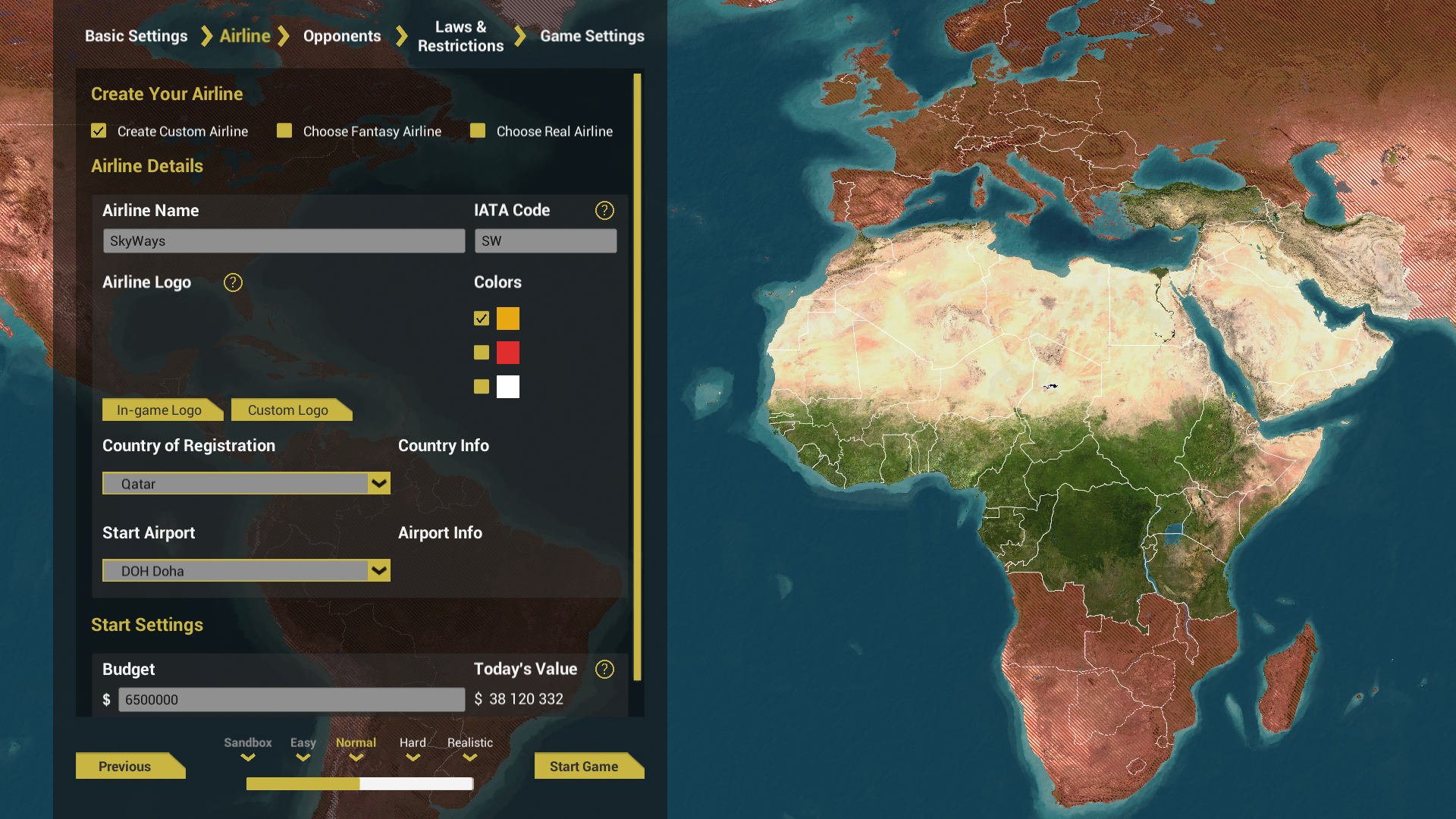 At the top of the window you have 3 options. You can decide to create your own custom airline from scratch, select an in-game fantasy airline or pick a real airline. Note that the game will not come with real airlines due to copyrights, but the community will be able to mod airlines and flag them as 'real'.

Here you can set the basic settings of your airline: the name, the IATA  code, ...

As you can see you can chose one of the standard logos we provide, or load your own logo from an image file.

Then you saw in the video how you can edit the colors. You have to set one main color, the other two are optional. These colors will be used in graphs to be able to identify your airline.

Finally you can set the country or registration and your start airport. Next to it you see I provide some space for country/airport info. Here I will display some useful info when choosing your ideal start location. Think along the lines of tax rates, landing fees, curfews, ...

Currently there is only the start budget setting. As you can see I added some info next to the input field showing how much money you are giving yourself in today's value. This should make it clear how rich you actually are making yourself. ;)

I will add more settings in this section in the future, like shareholders and a start fleet.

Add your own airline to the base game

If you want to add your own airline to the base game, that's possible! If you become a patron (minimum business class) you can create your own airline and send it to us. It will then be included in the game and appear in scenarios as AI.

Have a look here: https://www.patreon.com/theairlineproject?fan_landing=true

We added an in game changelog. The changelog is somewhat empty now, but that will change with the second Dev Release. To open the changelog, you should click on the version number at the bottom right of the screen. 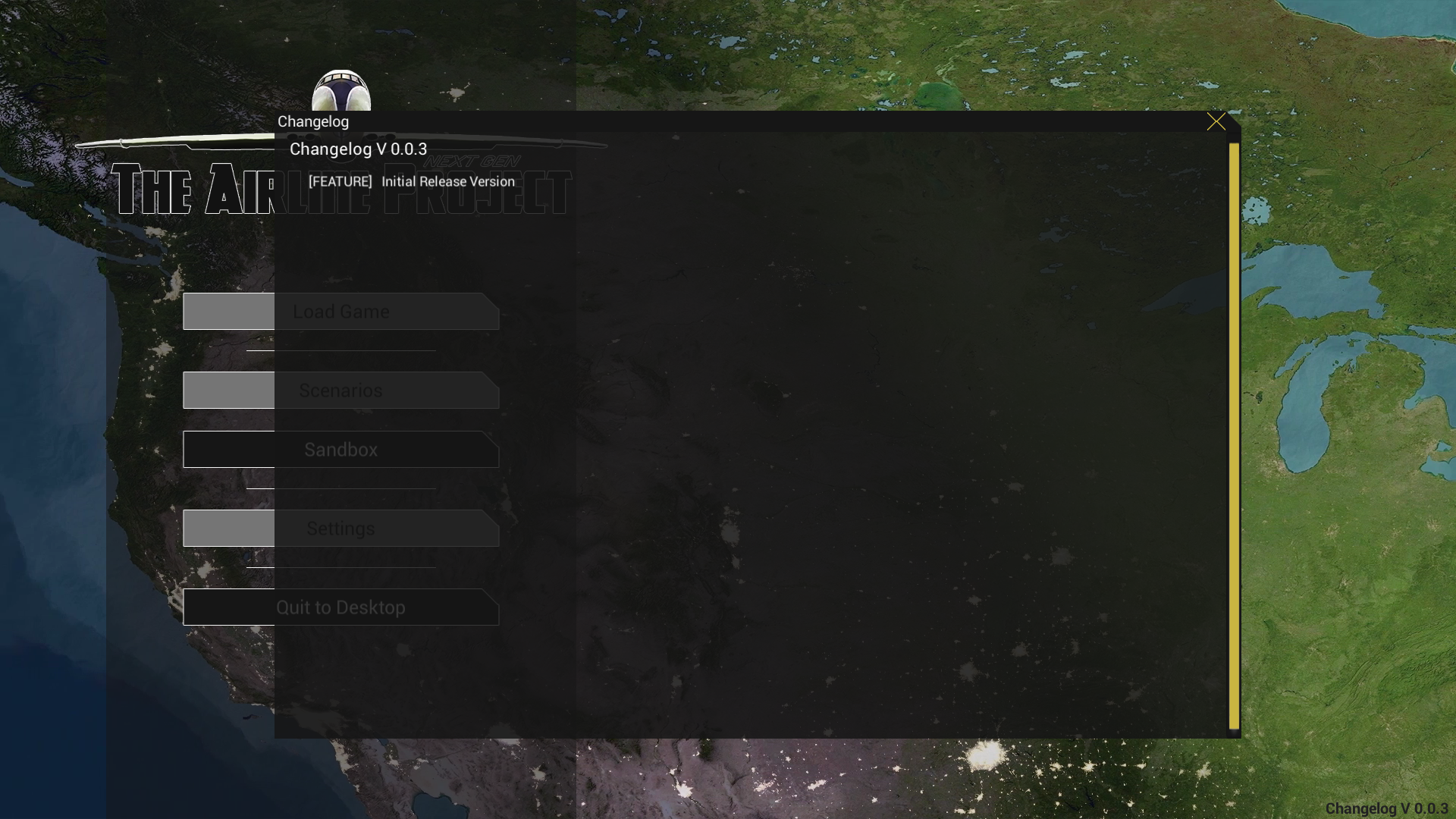 We also added a couple of new countries/territory changes. Some of them are controversial. Please don't get mad at me over it. :) The reasoning is that if you land at these airports, the border agents will consider it to be a different country. The changes are:

As promised, I'll give you an update on what the next month will bring for our patrons.

Round Christmas we will have a first Dev Release for our patrons. Many of you are looking forward to this.
I want to be super clear about this, we call it a 'Dev Release' for a reason. It is not a playable game yet.

You will be able to create your own airline as shown in the video earlier in this post, you can have a look around in the world and see the airports change over time. Perhaps with a little bit of luck you will be able to open a manufacturer window and have a look at their fleets. The airports in the game at this moment are mostly situated in Europe, North Africa and the Middle East, with some extras in the Caribbean and the Pacific Ocean.

I really hope it is clear that the Patreon at this very moment is meant to raise funds for the development, and not to gain access to a 'finished game', because we still have some development to go before I'd start calling it a 'game'. ;)

I will continue to announce every month before Patreon gathers the payments what the new version of the game will bring to our Patrons.

That being said, patrons do get some exclusive extras, depending on your tier. This month bring some extra extras to keep the higher tiers attractive. I will announce them soon via the Patreon page.

Will New UI Be Available For Free?

No the new UI is for TAP NG, which will be a paid game.